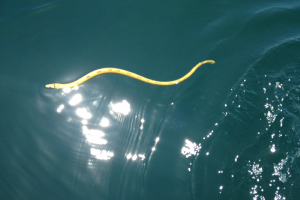 The pelagic sea snake is usually found in open ocean.

It waits for fish to swim by and injects with venom. It is more toxic than the cobra but it has very small fangs. It gives live birth to 1-6 individuals at a time. The sea snake hunts during the day at the water’s surface. It sleeps on the sea bottom for up to 3.5 hours then come up to breathe, of which it does so through the skin, removing oxygen from the water and releasing carbon dioxide. The sea snake has a special gland under its tongue that allows filtering of salt of out the water. They are not aggressive although they can hang together in the 100s – but few would swim in the water then I think!